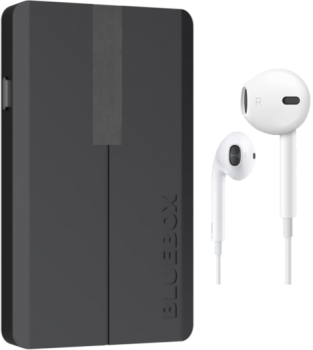 Currently, commercial encrypted headset products are generally applying scrambling technology. However, no matter how complicated the scrambling solution is, “the residue of speech intelligibility” will be existed. That is, there will be a speech characteristic vulnerability that can restore the scrambled voices to the original voices without cryptographic algorithm cracking. All this has been proved that commercial encrypted headset products using scrambling technology will not be secure enough for encrypted calls. 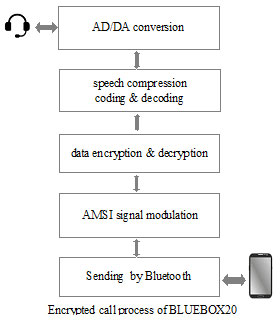 Q: Which phone models are supported?

BLUEBOX20 supports iPhone7 or higher,  and most of the Android smartphone with Qualcomm 845 , Kirin 970 or higher chipset.。

Q: Whether BLUEBOX20 must be used in pairs?

Yes, both sides must use BLUEBOX20 for encrypted calls. Otherwise, one side encrypts the voice, another side can’t decrypt it.

Q: Is it possible to make encrypted calls via cellular voice communications anywhere in the world?

Yes, but you need to select carriers who support GSM (using EFR or AMR speech coding), UMTS or VoLTE. BLUEBOX20 can not be used under CDMA or CDMA2000 network. In addition, for roaming and international long-distance calls, the effect of encrypted calls can not be guaranteed due to the different technical standards adopted by different carriers, as well as the possible problem caused by speech transcoding.

Q: Which VoIP applications are supported?

Q: Whether VoIP encrypted calls can be made anywhere in the world?

Yes, BLUEBOX20 could be used to make encrypted calls as long as your phone is connected to the internet and VoIP calls are in normal status. The effect of encrypted VoIP calls is related to network bandwidth, latency, and package loss rate. It is recommended to choose 4G network or 5G Wi-Fi as prior options.

Q: Why do we recommend using 4G/5G network or 5.8G Wi-Fi for encrypted VoIP calls?

BLUEBOX20 connects to the mobile phone via Bluetooth. There will be signal interference if both Bluetooth and Wi-Fi use the same frequency band of 2.4GHz, resulting in loss or distortion of the modulated waveform of encrypted calls transmitted by Bluetooth, thus will cause worse sound quality. In addition, It is also found that different brands and models of mobile phones have different degrees of interference (mainly due to the differences in antenna design). In order to avoid  signal interference completely, It is recommended to choose 4G/5G network or 5.8G Wi-Fi as prior options.